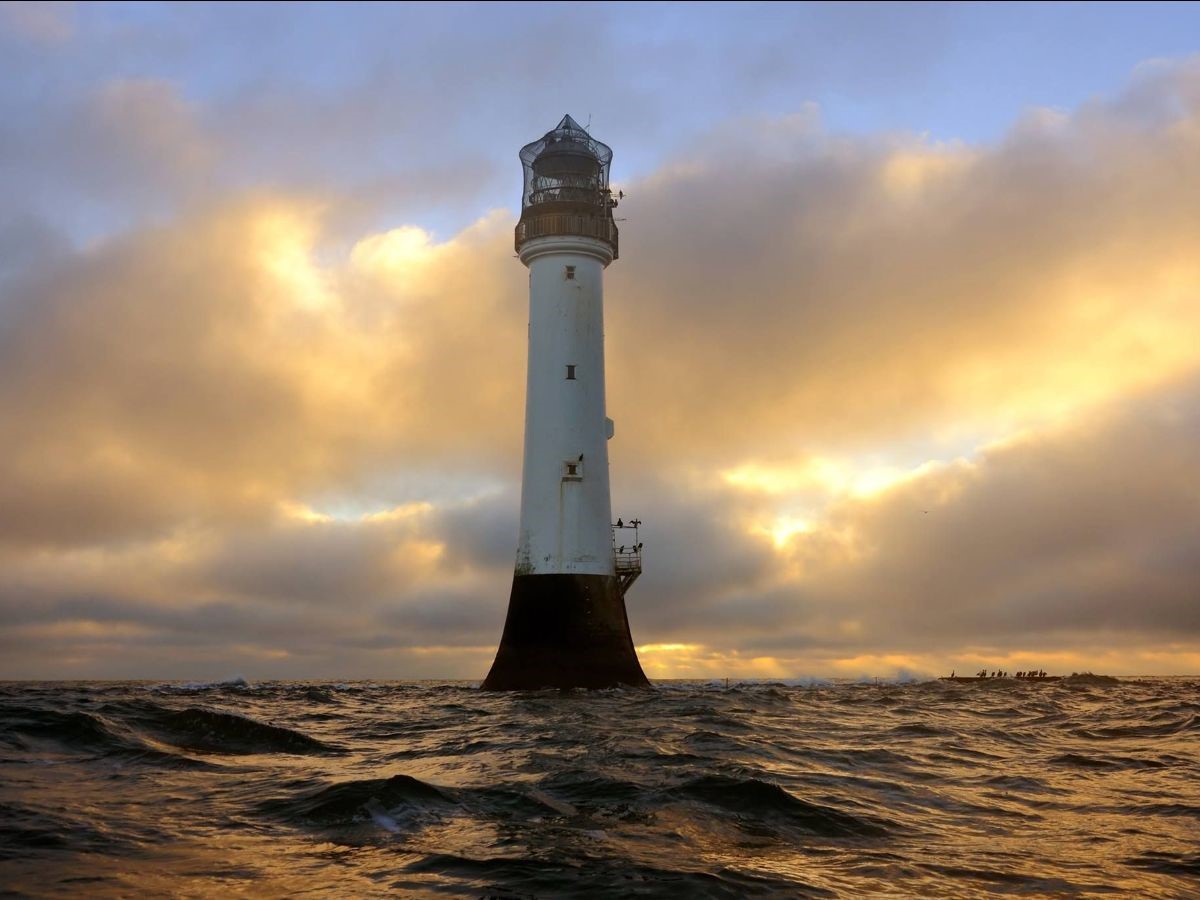 We recently visited the Signal Tower Museum at Arbroath harbour. It was built in 1813 as the shore station for the Bell Rock lighthouse, which is the oldest working sea-washed lighthouse in the world. The Bell Rock lighthouse was designed by the engineer Robert Stevenson and built at the beginning of the 19th century on the Bell Rock, a reef 11 miles southeast of Arbroath in the North Sea. It is considered to be the greatest single engineering feat of the early 19th century.

John Rennie was the engineer in charge. Stevenson was his assistant and was the resident engineer who stayed on the rock with his team of hand-picked men who built the lighthouse. His determination to build a lighthouse on the reef was because of the great danger posed to ships in the area around the reef, which is often completely submerged, being about 16 feet underwater at high tide. Without the lighthouse, ships only became aware of how close they were to the reef when it was too late.

The story of how the lighthouse was built is fascinating and was completed only because of the determination and faith of Stevenson. Stevenson’s faith not only kept him persevering in his fight to get permission to build the lighthouse, but also played a part in employing the men who built it. The men chosen to build the lighthouse were all men of faith; faith that got them through difficult times during construction. Stevenson looked forward in faith to achieve his ambition to make the waters around the reef safer for ships.

As we begin our new strategy, 'Look Forward in Faith', we may not plan to build large physical structures like lighthouses or castles, but our hopes for the Guild are the same. We want to build a movement that we trust will continue to reach out, support others and survive beyond our lifetimes.

In Hebrews 11: 8 -10 we read that Abraham, by faith, when called to go to a place he would later receive as his inheritance, obeyed and went, even though he did not know where he was going. By faith, he made his home in the promised land like a stranger in a foreign country; he lived in tents, as did Isaac and Jacob, who were heirs with him of the same promise. For he was looking forward to the city with foundations, whose architect and builder is God.

As Guild members, we too put our faith in God that He will lead us forward as we work for the future of the Guild. We may start a journey that we will not see finished but we know with God’s help it will be finished. Abraham started a journey that he did not finish, but he followed God’s direction and moved forward in faith and, as a result, his ancestors enjoyed the benefits of the journey he started.

As we look forward in faith and move forward following God’s direction, we too will leave a Guild for generations to come. 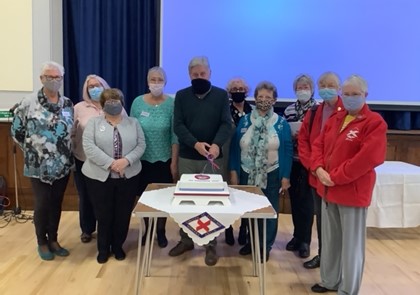 History in the making at Largs United Guild

In light of the future changes taking place throughout the Church of Scotland, and with church mergers very likely to be on the cards, it was decided, with the foresight, fortitude and faith typical of the Guild, that the Guilds of Clark Memorial, St Columba’s and St John’s churches would move forward with not three separate Guilds but with one Largs United Guild.

Among them, the three Guilds have contributed 272 years of service to the Church and the community. Throughout the transition, they have been supported by the local clergy.  The first meeting of the Largs United Guild took place last week, and it was great to see people queuing in large numbers to get in.

Almost 100 people joined the meeting, which took the form of a short act of communion led by Rev David Watson, followed by contributions from Iain Whyte and Karen Gillon. The Guild was also delighted to have a surprise visit from National Convenor, Margaret Muir, as well as Mary Ford and Helen Kerr from Guilds Together North Ayrshire. The meeting concluded with a  cup of tea and a piece of the special celebratory cake. 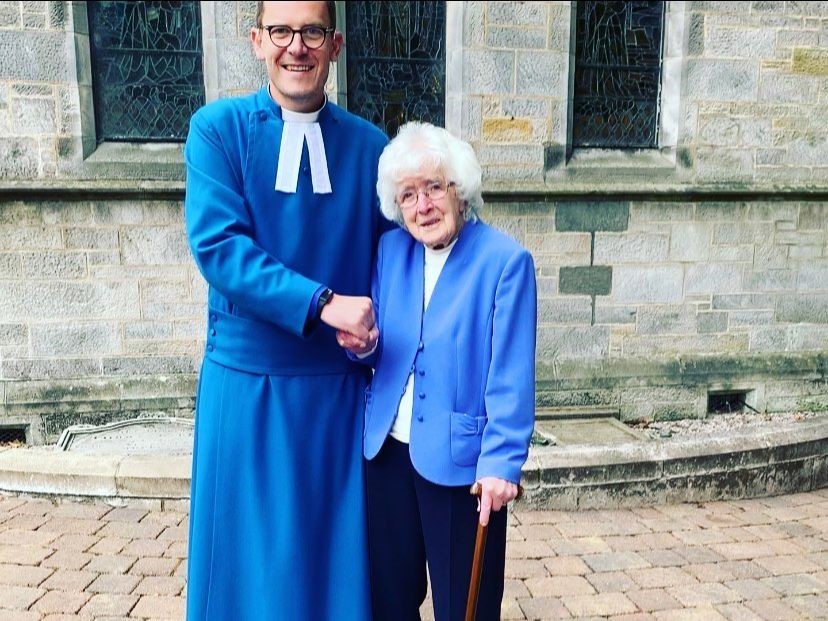 Who knew that Scotland's most senior senior citizen was a member of the Guild at Houston and Killellan Kirk Guild? Marion Dawson, 108 years young, was born on 19 January 1913. Marion came back to the Kirk after lockdown on 15 August, seen here in this photo with her minister, Rev Gary Noonan. Marion had been an active member of the Guild for 61 years.

Born and bred in Houston, she still lives at home with her daughter Jean. Marion was in the Young Wives then the Guild. She has always attended any fundraising events, whether it be the Guild, Kirk, Scottish Women's Institute, or any of the youth organisations (Boys Brigade, Girls Brigade, Scouts, Girl Guides, etc). She is an amazing lady with a very sharp mind.

Marion is a very special lady to both the Kirk and the Guild, and to the wider Houston community, and we pray that she continues to enjoy good health and happiness in the coming year. 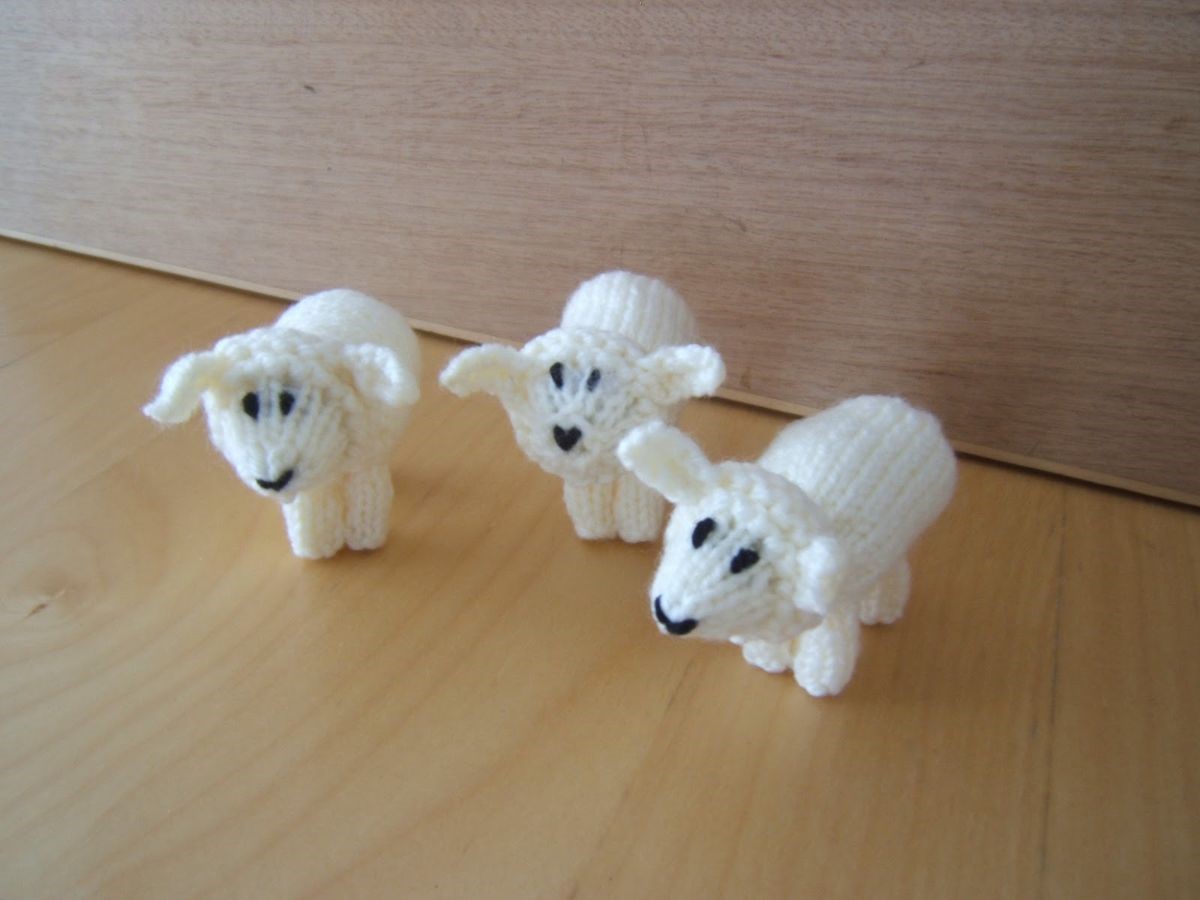 Last year, many churches and homes were festooned with Guild angels and everyone really appreciated the Good News of Christmas that they signified. This year, we are challenging you to fill the fields (well, church gardens and people's homes at least) with furry friends and get knitting sheep again, so we can use them to tell the Good News that was brought to humble shepherds that first Christmas Eve. It also helps to remind people that we are there for them all the time, not just during a pandemic. 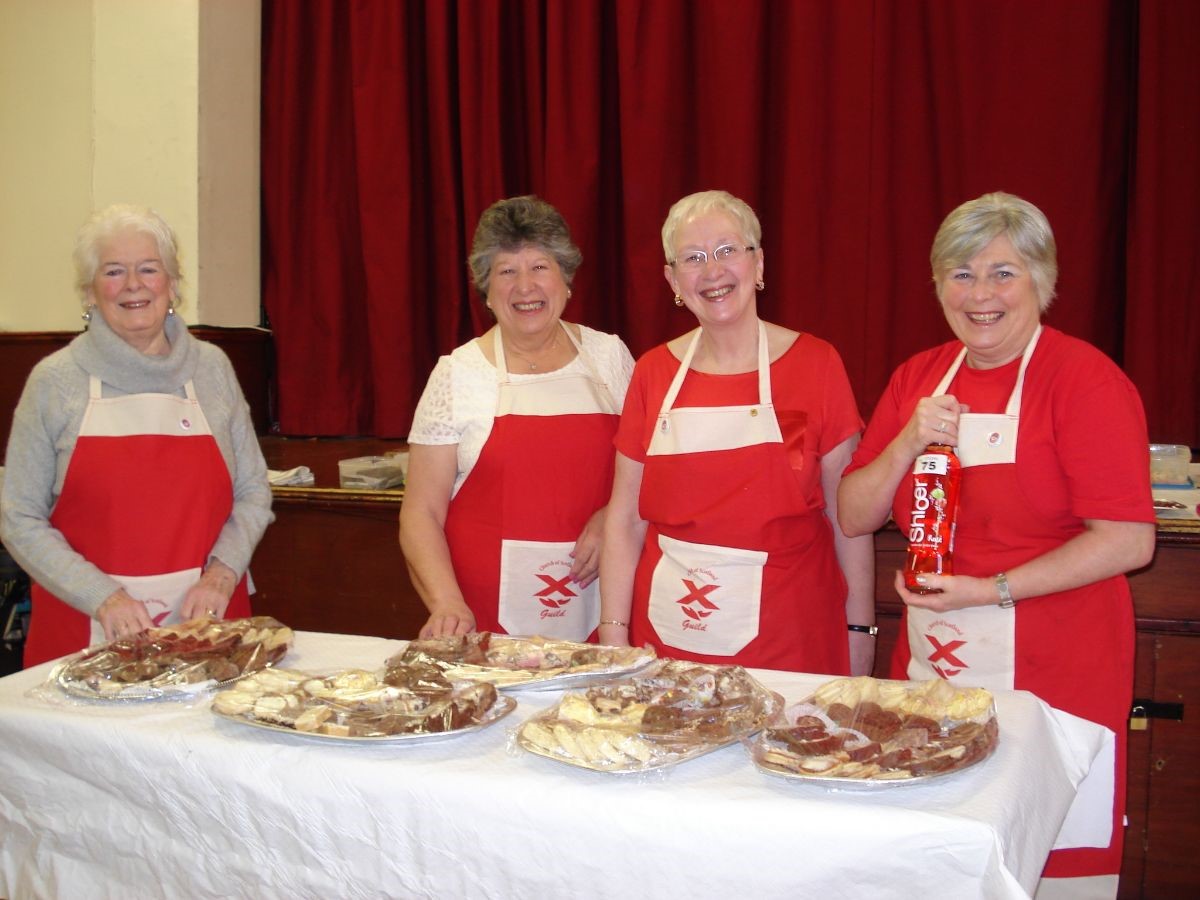 Our memory this week is from a coffee morning run by Kilmarnock New Laigh Kirk Guild a few years ago now. We are all looking forward to a time when this is a regular event again in our church halls. Until then we will need to make do with shop-bought. 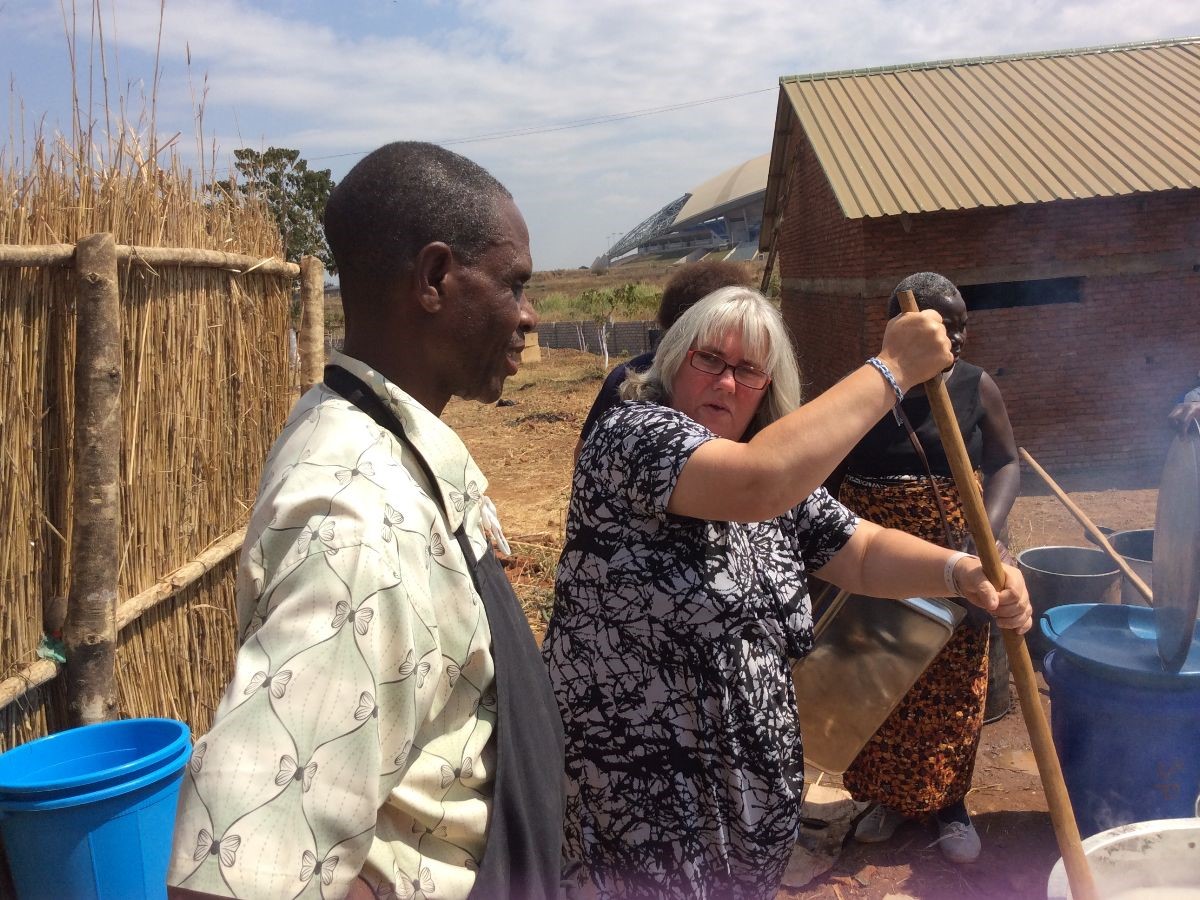 All creatures of our God and King

As many congregations celebrate harvest this month, we are sharing a well-known and loved harvest hymn, 'All creatures of our God and King'. We hope you enjoy singing along and reflecting. Even when we have empty supermarket shelves, we still have so much more than many other parts of the world. 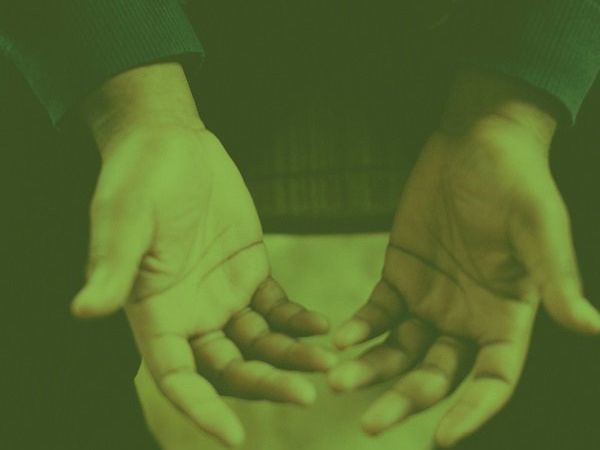 We'll be back on Monday 25 October

The Guild newsletter is taking a short break but we'll be back on Monday 25 October with the next newsletter. You can still stay in touch with us by sending us an email.

For up to date news and articles please

It seems like only yesterday that we were setting out on our journey, One Journey, Many Roads, and what a journey it was, in so many ways, on so many different paths for each of us. Yet here we are at the beginning of our new three-year strategy, Look Forward in Faith.

Looking forward in faith is something which comes naturally to us as Guild members and Christians.

Our new three-year strategy begins in 2021 and we look forward to starting our session stronger than ever and with confidence and trust in the one who brings us safely through all our difficult times.

The words of the well-known chorus sum up how we go forward, placing our trust in the one who guides us and protects us, Whose we are, and Whom we serve.

I know who holds the future, and he’ll guide me with his hand;
with God things don’t just happen, everything by him is planned.
So as I face the future with its problems large and small,
I’ll trust the God of miracles, give to him my all.

The themes for the three years are:

As Christians we are called to walk in the light and to be a light for others. Our light shines from the inside out when we live following the example of Jesus. Throughout the Old and New Testaments, light is used as a positive symbol. In the psalms we have the verse which, for me, describes our way forward as children of God,

Your word is a lamp for my feet, a light on my path. (Ps 119:105) (NIV) Our theme comes from the instruction that Jesus gave, after the Sermon on the Mount, that we should let our light shine and not hide it. It is found in Matthew’s gospel:

Neither do people light a lamp and put it under a bowl. Instead, they put it on its stand and it gives light to everyone in the house. (Matt 5: 15) (NIV)

A lamp does not serve its purpose
if it is hidden.

Do people look at us and see our light shining?

Do we let our light shine or do we stay hidden in the background?

Do we use our God given talents?

... let your light shine before others, that they may see your good deeds and glorify your Father in heaven (Matt 5:16) (NIV)

I hope you will find the material in the theme guide useful in planning your Guild meetings in the coming session, and don’t hide it away in a cupboard.

​The Guild at Fetteresso is a movement within the Church of Scotland nationally which invites and encourages both women and men to commit their lives to Jesus Christ and enables them to express their faith in worship, prayer and action.

Our Guild has a leadership team who coordinate the various aspects of the Guild. 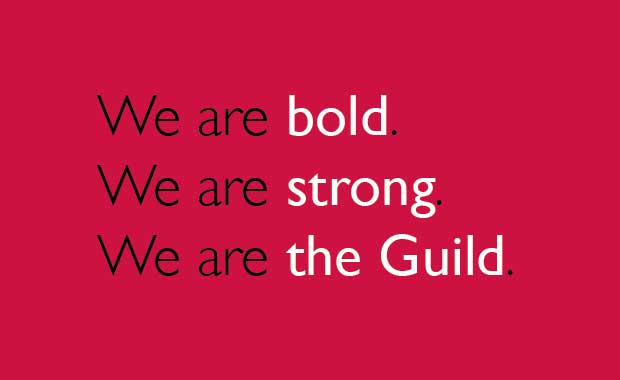 Every three years a strategy with three annual themes is decided by the Guild. The Guild also decides on a discussion topic every year. See below for the current theme, topic and strategy.

Annual themes were introduced to encourage Guilds to plan their programmes more effectively. These resources were introduced in the 1950s to give a focus for Guilds but are sufficiently broad to allow for imaginative planning.

Topics offer a chance to explore a particular issue of current concern, possibly leading to some local action.